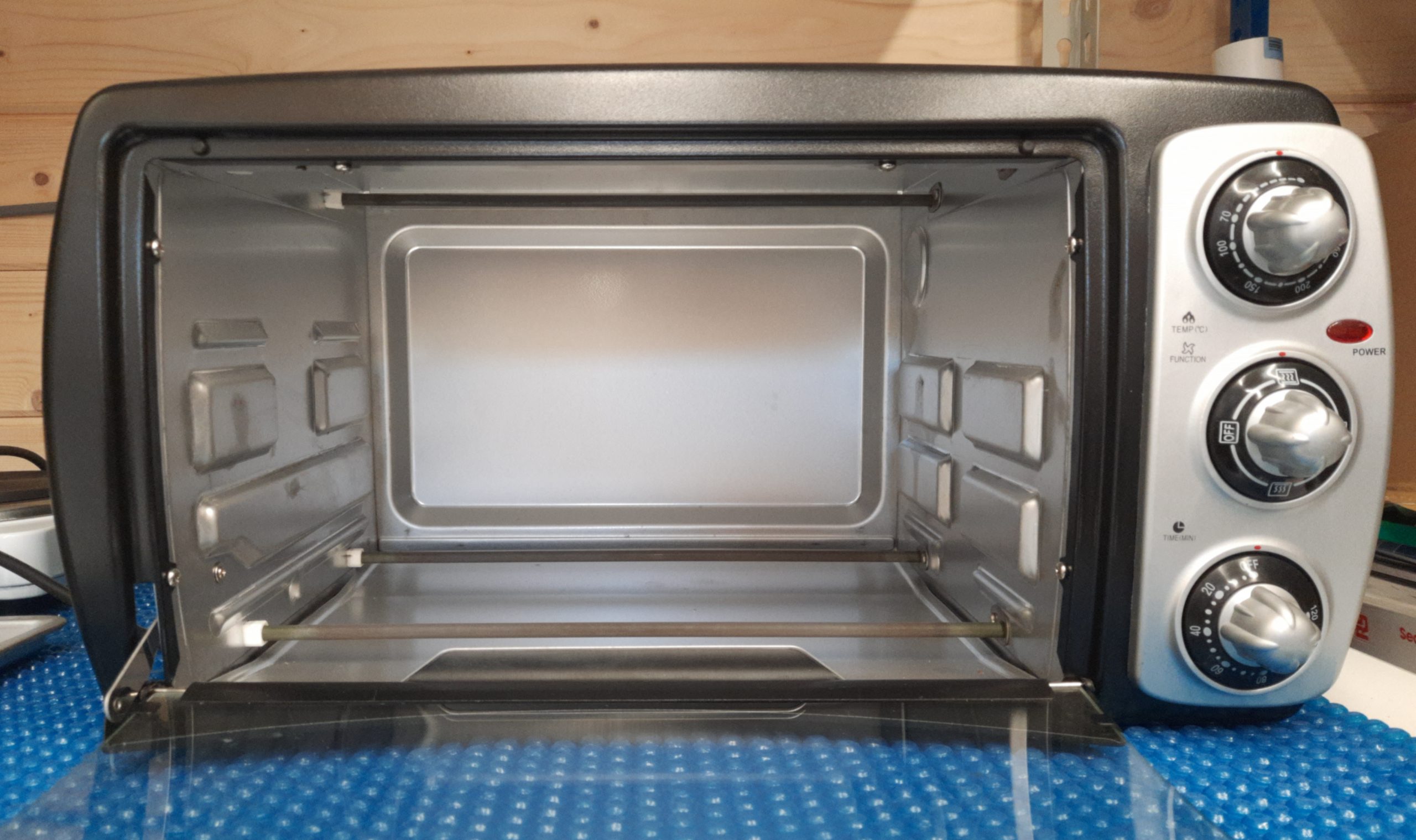 Pretty much anybody who does electronics prototyping needs to master reflow soldering at some point. There are a few ways to do it.

The simplest is to set up the PCB with solder paste and components pre-applied, onto a preheater to get up to a starting temperature. Then, apply the additional reflow heat with hot air from above. Such equipment can be had for little outlay, from the usual suppliers.

This is fine for one-off prototypes or very small quantities. However, temperature control is hard for fine-pitch parts. Anything really sensitive, like MEMs devices will suffer and sometimes its just hard to get enough heat into some boards at all.

How the factories do it

The factories use a conveyer system feeding into a multi-zonal convection oven. The preheat-reflow-cooldown profile is achieved by having zones at different temperatures, and passing the boards through them in sequence. The convection part is important, as it ensures all the heat is spread uniformly throughout the zone, so the PCB is heated evenly with the parts.

The other thing that is important with a modern convection oven, is that they do not directly heat the PCB with the heater units, but actually rely on secondary emission from metal or ceramic platens. The heaters themselves, whatever technology they use, are enclosed, so the intense IR radiation is absorbed only by the platens. This then re-radiates the heat as blackbody radiation (much longer wavelength IR) assisted by forced convection fans.

The nice thing is that the heaters themselves do not need to change temperature, as each zone is controlled precisely at one part of the temperature profile, and the ramp up-down is achieved by physically moving the boards between zones. This means that the heating profile is independent of the performance of the heaters, which allows for better efficiency.

This is the gold standard used today.

Anyway, I can’t fit such a thing in my workshop, even if I could afford the cost.

So, the next best thing is a desktop reflow oven. The choices are either to buy one or build one.

There are many cheaper ones available from the usual Chinese brands, with varying performance. Decent quality units can be had from more specialised suppliers, and are quite expensive for what they are. My plan is to repurpose a standard toaster oven, with some temperature measurement and some power control

Here it is in all its glory:

As can be seen, this uses four calrod resistance heater elements.

It seems simple conceptually, but there are immediate problems.

Firstly, the power. There is a lot of space in there. PCBs are flat, components that are surface-mounted are also not very tall. We aren’t going to solder a turkey to the board, so we don’t need so much volume.

Lots of volume, means lots of air. Lots of air, means lots of heat needs to be dumped into it from the heaters to get it to temperature. This will result in a sluggish heat up rate, making it hard to follow the correct temperature profile at best. At worst, the excessive heating time will cause permanent damage to sensitive parts.

The solutions to this are pretty obvious; Reduce the air volume, maximize the heater power, use fast heating elements and finally reduce heat losses with insulation.

The next main problem, is what happens after the reflow point is reached, and we need the temperature to drop back down to ambient, within a fairly short time. A big toaster oven will retain all that heat, and take an age to cool. This could be causing damage due to excess heat, as well as just wasting my time waiting around.

The only realistic solution to this is to exhaust the hot air into the environment, either with a valve or just by forcing the door open. An exhaust fan would help here. That exhaust fan needs to be able to survive air at nearly 300℃ which makes it a little awkward to find.

Finally, the method of heating is wrong. The toaster oven heating elements will radiate a lot of IR radiation (we like to call it ‘heat’) which will be absorbed more strongly by dark things (like those little black squares, with all those tiny, sensitive circuits) The other bits, the fibreglass PCB Substrate and the shiny, reflective PCB solder lands will absorb less rapidly.

This means the chips will heat up far faster than the solder lands, so by the time the latter are hot enough to melt the solder balls, the chips and any larger components could well be far too hot.

In order to get the solder to melt uniformly, then even more heat needs to be dumped into the board, risking overheating of some areas, and this will result in formation of solder balls or worse, charring of the solder flux.

Solder balls are a nightmare for fine-pitch work, and burnt flux makes cleaning much harder. Best to not overheat it then.

Anything that can be done to block this direct heating, will help. Remember earlier, when I talked about convection ovens?

The last problem that direct heating causes is shadowing. This is when a larger part absorbs heat from the heating element, and casts a shadow on the parts close to it, so they don’t heat as fast. Also, the solder lands directly below a part like an IC, will also be in the shadow of the IC itself, so will also not heat up as quickly as they could. Convection ovens also solve this problem.

The only solution I can think of is to block the direct heat path by adding some metal shielding, and ensure the heat can escape with air circulation.

It may turn out that even with some serious modifications, this will not be very well suited to soldering. However, it will still be very useful for baking PCBs post-cleaning as well as for baking moisture absorbing parts (higher MSL) prior to placement. We shall see, by just building it.